I locked my car and headed down the steps of the car park towards the main entrance of Southampton General Hospital.

Waves of anxiety swept over me.

I had come to visit a dear friend who is very poorly and I wasn’t sure what to expect.

Over the last two weeks things had taken a turn for the worse.

My heart was heavy as I approached the main hospital building.

Glancing round I noticed people in pyjamas sitting on benches in the paved area opposite the entrance.

My nostrils twitched and involuntarily I held my breath; the warm air was thick with the stench of cigarette smoke.

Stubbing out her fag, a woman with long greasy hair, a pink dressing gown and fluffy slippers, grabbed her drip stand and shuffled across the zebra crossing and through the sliding door into the hospital.

“Do you need any help?” asked one with a friendly smile – hospital volunteers on ‘meet and greet’ duty.  The smile was genuine and I remembered to breathe properly again.

“I’m looking for Ward C4, but first I need a toilet, a cash point and a cup of tea”.

They gave me directions and another reassuring smile.

All around me were reminders of the frailty of the human body, my own frailty. Wheelchairs, walking sticks, grey faces, worry. Fear gripped me again.

Taking a deep breath, I pressed the buzzer for entry to the ward.

Several hours later I emerged from the hushed efficiency of the clinical suites, a little more relaxed than I had entered.

I wished with all my heart that everything was back to normal.  But it wasn’t.  Nevertheless, there was no doubt about it – my friend was receiving the best possible medical, nursing and personal care.  The ward was spotlessly clean and every member of staff I had met, from the tea lady to the Consultant, had behaved with kindness, compassion and professionalism.

There is so much to be proud of in the NHS.

Back outside, a queue was forming at Burger King.

Furtively, I pulled my iPhone out of my pocket and took a picture.  I had to convince myself that I hadn’t imagined it, that the cortisol coursing through my veins hadn’t scrambled my senses.

But there it was – plain to see – Home of the Whopper.

University Hospital Southampton NHS Foundation Trust is, according to its annual report:

…a centre of excellence for training the doctors and nurses of the future and developing treatments for tomorrow’s patients. Its role in research and education, developed in active partnership with the University of Southampton distinguish it as a hospital that works at the leading edge of healthcare developments in the NHS and internationally.

I believe them.  But given these credentials, surely they must know that diet is a key determinant of long-term health?

Reports by the World Health Organisation describe in detail how, in most countries, a few major risk factors account for much of the illness and death (1).

For non-communicable diseases, the most important risks include high blood pressure, high concentrations of cholesterol in the blood, inadequate intake of fruit and vegetables, overweight or obesity, physical inactivity and tobacco use.

These risks arise predominantly from elevated consumption of energy-dense, nutrient-poor foods that are high in fat, sugar and salt; reduced levels of physical activity at school, work, and home; and smoking.

There, in front of my eyes, was evidence that one of the most prestigious teaching hospitals in the UK is not only ignoring public health research, it is encouraging its patients, carers and staff to indulge in food and drink that is scientifically proven to damage human health.

At this point, I must stress that NHS patients are not given fast food by hospital staff when they are on the ward.  They are offered three meals a day, with choices from an extensive menu of hot and cold dishes.  My friend had eaten a Cornish pasty followed by a yoghurt, for example.

This food is not, however, available for visitors or staff.  Furthermore, as I had witnessed myself, patients are able to leave the wards during the day and wander around the shopping area.  Outside, I had seen some of them eating burgers whilst smoking.

Two weeks ago, a Health and Wellbeing Summit was convened by NHS Employers and Dame Carol Black.  It brought together a range of senior NHS leaders to demonstrate their commitment to the health and wellbeing of the NHS workforce.

The Boorman Review published in 2009 had already highlighted both the individual and business value of healthier NHS employees.

We believe that the NHS can reduce current rates of sickness absence by a third, and doing so would mean:

The benefits of strong health and wellbeing programmes in the NHS go far beyond the individual. Staff whose wellbeing and health is well supported deliver better care and are more resilient and better engaged with their role. At a time when the NHS is striving to make the absolute most of its resources, getting this right is crucial. I am very pleased that the NHS leaders in the new system are getting behind this agenda so quickly.

Participants signed a pledge to continue to improve the health and wellbeing of staff who work in healthcare.

Where does Burger King in a hospital fit into this, I wonder?

America has the same problem but the tide is turning.

After 34 years at the Children’s Hospital of Philadelphia, McDonald’s closed its doors last September.

But as fast as some hospitals are ending contracts with fast food outlets, others are starting them.  Chick-fil-A recently set up shop in several facilities, including the Texas Medical Center’s St. Luke’s Episcopal Hospital and the Medical University of South Carolina University Hospital in Charleston, S.C.

Of the 14,000 McDonald’s in the United States, the company says there are 27 in hospitals.  They say that fast food outlets can be a convenience and a comfort for patients. The food may also appeal to some patients’ picky tastes when undergoing difficult treatments. 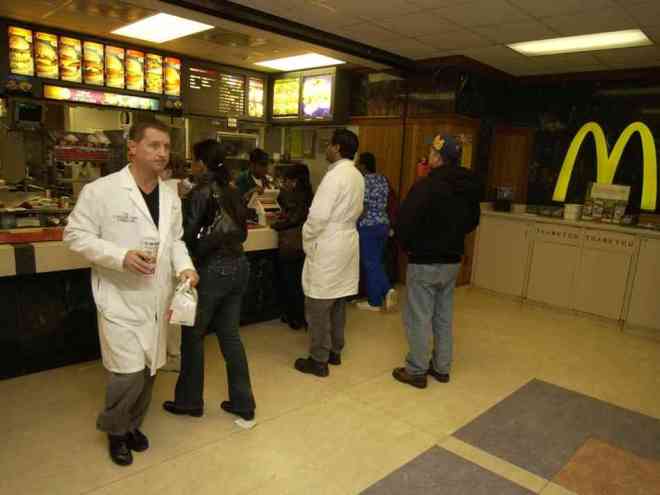 The Physicians’ Committee for Responsible Medicine surveyed hospital food at 100 US hospitals in 2011.  Some had as many as five fast food outlets.

Many clinicians feel that the presence of such outlets sends an inconsistent message to patients, staff and the community and have campaigned to remove them.  It has not always been easy.

Ten years ago, the Cleveland Clinic in Ohio tried in vain to terminate its contract with McDonald’s.  At the time, the clinic’s lead heart surgeon (and now hospital CEO), Delos Cosgove, proposed removing all fast food vendors.

The Pizza Hut did close. But McDonald’s stayed and remains a tricky relationship for the hospital, which is a pioneer in whole environment approaches to employee wellness.

Despite their failure to eliminate McDonald’s from their campus, the Cleveland Clinic, which has 37,000 employees, pressed ahead with other actions focused on the four big public health issues: tobacco, food choices and portion size, physical inactivity and stress.

Here is their timeline:

What are the results?

This is easy to say but hard to do.

I wouldn’t mind betting that the Board responsible for Southampton General Hospital is facing a similar dilemma to that of Croydon University Hospital Trust in Surrey, which received negative media coverage when they had to pay £24,000 to shut down a Burger King restaurant inside their hospital.

bleated the Daily Mail, without considering the long-term costs to the health service of people consuming Burger King’s products.

It may also be the case that they do not have direct control over which businesses operate in the entrance area if this is handled by a landlord.

At some point, however, someone within the NHS needs to demonstrate leadership, courage and imagination and set about creating hospital environments which make it easy for people to make healthy choices, as they have done at the Cleveland Clinic in the USA.

Will Southampton General Hospital, excellent in so many ways, take up the challenge?  I hope so.

If you have enjoyed this post please leave your comments below.

Nutrition expert Jane Philpott MA (Oxon), MSc, PhD provides education and consultancy services for individuals and organisations on the link between what we eat and our health and well-being.